April Fools’ No Fooling Around this Month!! 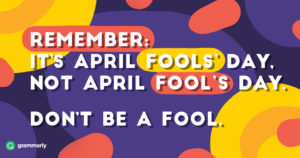 Have you ever wondered why April Fools’ Day is even a thing or why it got its own day??

“On April 1, 1700, English pranksters begin popularizing the annual tradition of April Fools’ Day by playing practical jokes on each other.

Although the day, also called All Fools’ Day, has been celebrated for several centuries by different cultures, its exact origins remain a mystery.

Some historians speculate that April Fools’ Day dates back to 1582, when France switched from the Julian calendar to the Gregorian calendar, as called for by the Council of Trent in 1563. People who were slow to get the news or failed to recognize that the start of the new year had moved to January 1 and continued to celebrate it during the last week of March through April 1 became the butt of jokes and hoaxes.

These pranks included having paper fish placed on their backs and being referred to as poisson d’avril (April fish), said to symbolize a young, “easily hooked” fish and a gullible person.

April Fools’ Day spread throughout Britain during the 18th century. In Scotland, the tradition became a two-day event, starting with “hunting the gowk,” in which people were sent on phony errands (gowk is a word for cuckoo bird, a symbol for fool) and followed by Tailie Day, which involved pranks played on people’s derrieres, such as pinning fake tails or “kick me” signs on them.” ~ www.history.com

This entry was posted in Uncategorized. Bookmark the permalink.